On Tuesday evening, the police moved in on the Occupation. Southwark Council had obtained an Interim Possession Order for 77-105 Chartridge House, the block that we first occupied on the 31st of January. Our callout drew many hundreds to resist the evictions, both from inside the Chartridge flats and outside on the estate. Due to that resistance, it took the police hours to gain entry to the block.

We used ladders to climb into this block, just before the police came in to evict us from the block we’d originally been occupying. Thanks to all the supporters, we successfully repelled the police from taking any action against our new occupation.

Despite the massive police presence, some of us managed to occupy 69-76 Chartridge. This is the adjoining block that was smashed up by Southwark Council vandals last week in a feeble attempt to stem the spread of the protest.

Just before 10pm, the riot police declared their intention to break into our new, legal, occupation and arrest all of us. They gave us the option of leaving voluntarily but we refused to do so, and thanks to the large number of supporters, successfully resisted them. The police only managed to remove the supporters outside through a dispersal order over the estate and a number of overly-violent arrests.

We have continued our protest here ever since. The fences erected by Southwark Council last week are now festooned with banners. We are in good spirits, and thank all those who have shown solidarity and brought us breakfast etc. We encourage people to continue to come down and support the Aylesbury Estate Occupation.

Most of those arrested after the eviction on Tuesday night are now out of police custody. However at least one person is still being held, and is due to appear at Camberwell Magistrates Court this morning. We’ll be there to show our solidarity and support, from 9:30am onwards, possibly for most of the day, depending on how busy the court is. Please come along if you can, and spread the word! 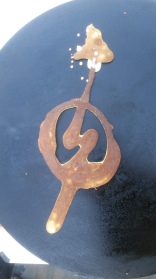 At lunchtime, some of us will be making and eating a fried brunch back at the occupation, with a group of young people from the estate. They’d like to play football and other games, so that may be happening later in the afternoon, depending on the weather.

At last night’s neighbourhood meeting, we started planning a whole afternoon of activties for this Saturday, the 21st. We’re still figuring out what will happen when, are very open to suggestions, requests, and of course offers of help, so will be talking more at the meeting this evening (6:30pm, Thursday 19th), and posting full details up here as soon as they’re confirmed.