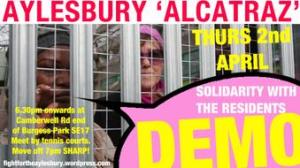 Several hundred people responded to our call-out for an “Eviction Eve solidarity demo”.

Solidarity with the remaining residents, who are still living in the enclosure (aka “First Development Site”), and will be for months to come.

For the past few weeks, the presence of the fences and security guards has made life intolerable for these people.

They have been asking why they’re no longer able to get in and out of their homes using the most convenient routes, and the nearest gates. Despite having guards stationed at each gate 24 hours/day, legitimate residents have been forced to make an arduous detour – of up to half a mile – each time they enter or leave (!) the area, leaving some house-bound.

They complain that they weren’t consulted about this arrangement, and that it’s not what they envisioned when they lobbied the council last year to install door-entry systems on the blocks themselves.

Whenever their friends or family come to visit, the security guards make them come all the way to the main gate to authorise their guests’ entry. Anyone not capable of walking the extra distance has been unable to visit.

Despite having every right to be there, guests of tenants and leaseholders have reported being intimidated and sometimes chased through the estate by security guards. Some of them have even been assaulted and ejected from the area. The security guards have acted unlawfully and with impunity. The police have still not taken any action about these assaults.

When the fences went up, and the locks were fitted on the gates, some of the residents were assured that they would be given keys for these locks. Two weeks later, no keys.

And no response from the council about any of these complaints. Even when the story made it into the newspapers, all the council spokesperson could say was that they would “review the situation”. Still no word on that review.

We’ve been forced to leave Chiltern House, due to the Interim Possession Order granted to the council in court on Thursday. We’ve left the enclosure. With us gone, there is absolutely no excuse for the council to keep treating the residents “like animals” (their own words), trapped in what has now been dubbed “Alcatraz”.

Obviously the residents have not been the only people affected by the fences. It’s clear to us that their construction was “expedited” (speeded up) because of our occupations. The council hoped to stop us from protesting, and stop people from the rest of the estate/ world from coming to visit us.

If leaseholders and their tenants were adversely affected, the council probably just hoped that it would encourage them to move out quicker, and accept whatever incredibly insultingly low figure offered to them for their flats. Just like the elderly folk CPO (Compulsary Purchase Order) -ed out of the Wolverton flats, these people’s lives are just collatoral damage to Southwark.

The council didn’t bother with planning permission or stopping up orders, meaning that the fences themselves are illegal.

Along with hundreds of others from the neighbourhood, we took direct action against the fences. On the evening of 2nd April, we brought down the fences in three places, spread out around the perimeter. No machinery was involved – it was pure people power.

The Creation Trust claims to represent those who live on the Aylesbury, and says it cares about their views. It claims to “consult” but isn’t very good at listening. Just like the council itself, it has ignored the complaints of both leaseholders and tenants. These days, the Creation Trust is almost entirely controlled by the council, in the shape of people like Councillor Mark Williams. He could have done something to help the beleagured residents if he had wanted to.

Instead of doing something themselves, they decided to brand our action a “cheap publicity stunt”. Anyone who had actually taken the time to read our media policy would find this laughable. We don’t do things for publicity. We do things because they need done. We do things for ourselves, together, sometimes together with others, and we don’t wait for permission.

We’re not going to pander to the politicians, to the media, to those paid to “represent”, “consult” or “revitalise” us. We’re not going to sit back and wait for them to do the right thing. They’re already in the pockets of the developers, the privateers, and the other financial interests at play here.

We have not stopped Fighting for the Aylesbury and against its destruction. We continue to stand in solidarity with the leaseholders and tenants who want to stay on the estate.

Watch our blog for updates 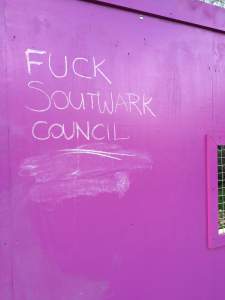 PS: There was only one arrest on Thursday night. The police have consistently failed to take complaints of security guard violence seriously. However, they did arrest an Aylesbury leaseholder, following an incident with a belligerent guard, well after the fences had fallen, and most of the protestors had left the area.

This news prompted a spontaneous, and very lively, solidarity demo at Walworth Road cop shop, which continued long after her release.

Despite five hours in custody, she was upbeat about the campaign, and touched by the large number of people waiting for her. We support all arrestees, and will support her through whatever happens next.

While we there we met a lot of people, and made some new friends. Including one elderly man who had been called in to collect his daughter at 6pm, and was still waiting for her nine hours later. The custody suite repeatedly told him that she would be released “soon” but refused to give him any other explanation for the long wait in the cold.

As he said himself “It’s no wonder that people don’t like the police”. Anyway with our presence and music we made the police station reception a less intimidating and unfriendly place than it usually is.