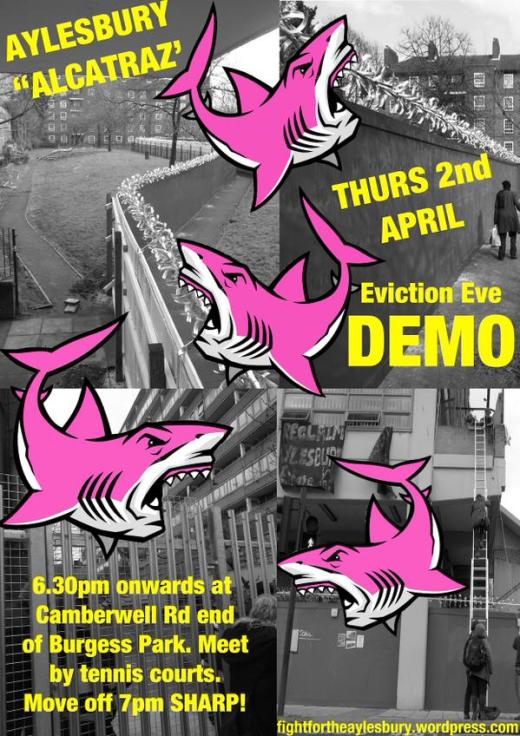 Over the past few days and nights, we have seen an escalation in intimidating behaviour and actual violence from the security guards.

They claim to be following orders from Southwark Council, to deny access to the ‘First Development Site ‘ (FDS) area, which is now entirely sealed off with a large fence. Not just deny access to us (we who continue to occupy in Chiltern) but also anyone else trying to visit the area.

There are still around twenty households (both leaseholders and tenants) who haven’t been ‘decanted’ yet, and they are also suffering from the fencing. Despite the presence of security guards at each of the seven gates around its perimeter, they are not allowed to enter or leave through six of those gates. Instead they are forced to make a lengthy detour, all the way over to the gate on Westmoreland Road, every time they leave their homes or come back in.

If guests want to visit them, the security guards insist that the residents must come all the way to that one gate to fetch them. This had made it impossible for many elderly friends and relatives to visit at all, and has left at least one woman housebound.

Whenever asked about the fencing/ security arrangements, the council trot out a line about how they did this because those residents asked them to. From our conversations with the residents, it’s clear that this is a lie. Some of them asked for doors to be fitted to the actual blocks they live in, with an entry-phone system to let their guests in, but they didn’t ask for this. They had no wish to deprive people from walking their dogs, or travelling across this corner of the estate, and hate the fact that they now live in what is effectively a big cage.

The council ignored their requests, and built the fence without any consultation, without any planning permission (neither for the fence nor for the proposed development) and without obtaining ‘stopping up orders’, even though its construction has prevented members of the public from using rights of way across the estate.

When they first fitted the gates, the residents were told they’d be given keys, so they could continue using the gate nearest to their flats/ most convenient for them. However this hasn’t happened.

Not content with abusing their power at the gates, the security are also now prowling the enclosure, chasing anyone they see and challenging them in an intimidating manner. They are telling people that this is now a “dead zone” and that nobody may walk through it. They have physically attacked anyone they suspect of supporting the protest, including some people who were making legitimate visits to lawfully occupied flats, and were therefore not trespassing in any way.

There have been a number of unprovoked attacks on people within the enclosure, with security guards going well beyond any notion of “reasonable force” when restraining/ frogmarching/ dragging them out of the enclosure/ down stairwells/ down from trees and ladders and buildings. They have kicked, punched and attempted to strangle people.

They have stolen items – including a laptop belonging to a supporter of the campaign – and on Friday night criminally damaged a rope ladder belonging to us (after grabbing it while one of our friends was standing on it, with absolutely no regard for his health and safety).

Although we have filmed some of these incidents, we haven’t captured them all on camera because in some cases we were caught unaware, or because these things took place in dark corners to isolated people, or because we only have a limited number of cameras at the occupation.

Call-out for cameras!  And for solidarity action!

Rather than asking supporters to come along to Lambeth County Court on Thursday morning, we are instead calling out for a demo around the estate itself on Thursday evening.

In solidarity with the remaining residents trapped behind the fence.

Gather from 6.30pm onwards at the western end of Burgess Park

(the main gate onto Camberwell Road, near the tennis courts).

We will move off at 7pm sharp!